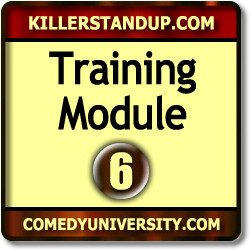 One of the significant factors that keep comedians from being able to generate high impact, big laugh stand-up comedy material is that they do not rehearse or do not properly rehearse their stand-up comedy extensively before delivering their material to audiences.

This directly causes a number of undesirable issues:

You should be fully aware at this point that there is much more involved in developing and delivering stand-up comedy material that generates headliner laughter levels than merely memorizing sentences and reciting them on stage.

This Training Module will take you through the simple, yet critical process of properly rehearsing your stand-up comedy material so that you CAN generate maximum laughter responses with that material in the shortest time possible.

Here are links to the four lessons in Training Module Six:

Lesson 1: Your Mental Approach To Stand-up Comedy Matters Before You Take The Stage

Lesson 4: Testing Your Comedy Material Before You Get To The Stage