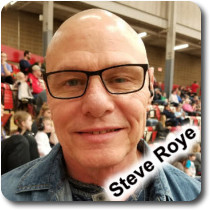 I made the decision to start a stand-up comedy career in San Diego, CA at the age of 32.

I accidently discovered what is now referred to as the Killer Stand-up Comedy System/Online Course.

And do let me say that this discovery completely changed my entire approach for how spoken word comedy is developed and delivered as a comedian, trainer and a public speaking professional.

If you want a detailed, blow-by-blow account of my horrible start at stand-up comedy and why I almost quit, check out Chapter 1 of the Interactive Writing Guide.

Long story short — in November 1992, after tossing out virtually all of my “paper written jokes” using the “conventional” methods taught by all the so-called experts…

In April 1993 I won won the Camp Pendleton Comedy Contest, which ultimately resulted in numerous appearances in the local comedy clubs — comedy clubs that I previously couldn’t even get open mic time in.

In less than 24 months after winning that contest, I had developed a stand-up comedy act that afforded me the opportunity to headline 600-1500 seat venues all over Southern California and begin frequently working corporate events as a comedian. Not only that…

I began to be approached for speaking and training engagements that were a direct result of my ability to entertain audiences in virtually any environment.

In 1996, I began teaching other comedians my “system” for developing and delivering stand-up comedy material without having to “write” jokes from thin air.

Not long after that, individuals involved in public speaking began to use my methods to add humor and comedy to their speeches and presentations.

I retired from the US Navy in 1999 after 20 years of honorable service.

After writing several extensive manuals on my methods and techniques, in 2001 I launched my first website to share my secrets for quickly developing and delivering high impact stand-up comedy material.

In 2003, I developed the Comedy Evaluator Pro software for comedians which can also be effectively used by pubic speaking professionals as well. More information on how the software was born can be found in this section on this page.

After having reached all of my stand-up comedy goals, in 2005 I made the decision to retire from live performances and devote all my time to writing and teaching others how to develop and deliver headliner level stand-up comedy material and more recently…

I am in the process of sharing my secrets on this website as they apply specifically to public speaking professionals and enthusiasts on how to develop and deliver funny speeches and presentations.

Note: Below you will find the stand-up comedy/public speaking resume that I accumulated during my career before retiring as an active performer in 2005 and shifting my primary focus to training and consulting others in developing their own stand-up comedy act.

There’s no “padding” in my comedy resume. If anything, there are important listings in this comedy resume below that are missing.

I accumulated the abbreviated resume below as a headlining comedian for 11 of the 13 years of my active performing stand-up comedy career — without the aid of a manager, an agent, a publicist or without a single TV credit.

I was also able to accumulate a large number of speaking engagements during my entertainment career because of my ability as a pro comedian.

Here are a just couple of video clips of my stand-up comedy before I retired from live performances to focus on stand-up comedy education (very small audience — only 50-60 people). Additional video clips are provided in the Interactive Guides included with Killer Stand-up Online Course:

In 1992, after almost a decade as a professional medical trainer who could easily make students laugh so hard it would interrupt other classes…

It seemed logical to me that stand-up comedy would be a fairly easy adventure to tackle.

After buying and studying every possible book available at the time on how to “write” stand-up comedy material, I quickly discovered that the information provided in those books did not work for me.

As a matter of fact, I had already made the decision to quit stand-up comedy when I had a chance meeting with comedian John Marks while involved with a specialized Navy training course in Washington, D.C. in September 1992.

From that single conversation, the process for developing and delivering headliner level stand-up comedy material now known as the Killer Stand-up Comedy System was born.

It should be obvious that the results of how effective my system was is reflected in my comedy resume.

I should also mention that…

I had no desire to become a stand-up comedy teacher. But in 1996, another chance event lead me into teaching my system to other comedians.

In 2000, I was encouraged by yet another comedian (who became my editor and business partner) to write a book about my system.

That turned into two extensive volumes covering all aspects of developing and delivering stand-up comedy material without “writing jokes” in the literal sense — the way all the “conventional” books seem to embrace — much to the detriment of those who try to use those antiquated techniques and methodologies.

Then, an amazing thing happened.

His own stand-up comedy act began to improve dramatically.

My business partner at the time was generating headliner laughter levels with his stand-up comedy act and had become a difficult act to follow — in just a few short months.

That’s when I really knew I was onto something big with my system.

Subsequently, since 2001 the Killer Stand-up Comedy System online course has been sold in over 20 countries around the globe and has become the gold standard for individuals with comedy talent who want to bypass the old, and largely ineffective “conventional joke writing” processes that most comedians use today.

Not only that, I discovered that my methods were being used as a secret weapon for public speaking. ?

Just like the Killer Stand-up Comedy System, Comedy Evaluator Pro was not born by brilliant design, but by accidental necessity.

In the summer of 2003, I was invited to Club Med in Cancun for a consulting gig to evaluate their comedy shows for possible improvement.

At the end of the week, the top executive at the resort asked me if I could help them. I said that I certainly could. Then he asked this question that threw me for a loop:

“If we hire you as a consultant, how will we know we are making quantifiable improvements?”

I stood there like a deer in the headlights.

Immediately, I knew that there was really no way for me to “quantify” something as seemingly subjective as comedy — at least not without some serious thought.

I also knew that business, especially big business operates based on numbers — the most accurate numbers they can produce.

I told him that I would get back to him with the answer. I was up for three days straight trying to figure out how to answer that question.

On the fourth day, it finally hit me like a ton of bricks:

There are really only two events that happen during any comedy show:

1. The comedian (or comedy entertainers) is performing or…
2. The audience is laughing, cheering or applauding

It then became clear to me that both of these events were easily measurable.

All I needed was a couple of stopwatches and I could quantify real and objectively determined results using a simple ratio of “performing time” vs. “laugh time”.

The bigger the ratio, the better the comedy show based on objectively measured laughter, cheering and applause.

Hence — I had definitive and quantifiable performance improvement data to work with.

But it also didn’t take me long to realize that two stopwatches will only provide an overall quality score (PAR Score — Positive Audience Response — laughter, cheering or applause).

And I also discovered that trying to use two stopwatches does not work well at all for a minute-by-minute performance evaluation, which is the real performance data that you need to rapidly identify areas needing improvement.

Realizing those limitations and figuring out how to evaluate each minute of a comedy routine is how the process and the software were born.

This process, along with the software to effectively measure and evaluate each performing minute by a comedian or comedy entertainer was launched in Oct 2003.

So I didn’t just “dream up” the Comedy Evaluator Pro comedy performance system as just another thing to sell comedians.

It was developed in response to a question about quantifiable comedy improvement that I simply could not answer at the time.

Now, I have comedians all over the world evaluating and improving their acts based on a really simple, objective process — unless the software is not being used properly of course.

In 2010, Comedy Evaluator Pro drew the attention of filmmaker Jordan Brady and I ended up being featured among an amazing group of stand-up comedy stars and legends in the documentary “I Am Comic”.(currently available for review on Netflix).

PAR Score (or average seconds of laughter for each performing minute) only matters if your goal as a comedian is to cause an audience blow milk out their nose from laughing — even if they haven’t had any in awhile.

I have had a number of so-called “real” comedians try to debunk my software and my system. And I can totally understand why…

All comedians think they are the “best” at what they do.

Who wants software that helps one objectively evaluate performance results that have already happened and can possibly tell a comedian with hard objective data that they really weren’t as funny as they thought they were?

But here’s what I do know…

Comedians who are consistently hitting a PAR Score of 30+ don’t seem to have any complaints about my software or my system and use it without reservation to continue to improve.

It’s the comedians who CAN’T reach a 30+ PAR Score that seem to have the issues, oddly enough.

Oh well, I can’t please everyone, nor do I intend to.

My job is to help truly funny people realize their stand-up dreams and goals with the very best tools, techniques and strategies possible.

And I’m not stopping, no matter what the less-than-hilarious naysayers care to dish out.

Now, I am in the process of showing public speaking professionals how to use Comedy Evaluator Pro methodologies to their advantage as well, which brings me to this:

Public speaking professionals who can generate 30-45 seconds of laughter for every 5 minutes in front of an audience are on fire as far as laughter generation goes!

So there you go. That’s how Comedy Evaluator Pro was brought to life.

Other Credits And Credentials