Back To Previous Page 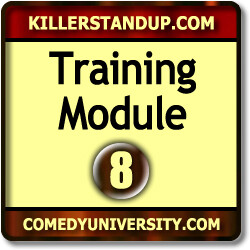 One of the HUGE advantages that you can have when it comes to developing and delivering headliner level stand-up comedy material in the shortest time possible is to engage in intelligent and focused performance benchmarking and improvement activities after your performances.

Here’s why I say that:

Most comedians don’t have so much as a clue on how to accurately and objectively gauge their performance levels, much less pinpoint areas in their act that they could quickly adjust, revise or remove to get better laughter results with their stand-up comedy material and delivery from one performance to the next.

You can see this for yourself at virtually any open mic in the world, night after night.

I have said that headline level stand-up comedy material is developed and honed over multiple performances.

Well, if you want to drastically reduce the number of performances and the trial and error involved with ultimately delivering high impact, big laugh stand-up comedy material…

This Training Module provides the critical information you need to know how to do just that.

Here are the three lesson links for Training Module Eight:

Back To Previous Page