A Closer Look At Your Comedy Talent 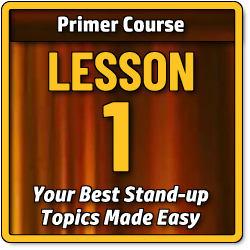 You might be wondering why a course called “Your Best Stand-up Topics Made Easy” would start with lessons about your comedy talent.

I will make it very easy for you…

The chances are very good that you will end up on the same dead end, no progress path that most new comedians end up on.

What do I mean by that? Here’s exactly what I mean…

Most new comedians actually start out using little (if any) of their natural comedy talent to develop or deliver their comedy material for audiences.

Subsequently they flop night after night right from the beginning of their stand-up comedy experience.

And it should come as no surprise that most will never get past comedy open mic nights in their pursuit to become a comedian. They simply wash out, thinking that they didn’t have enough comedy talent to succeed as a comedian.

This course is focused on showing you how to effectively use your natural comedy talent to identify the best comedy topics for your stand-up act.

You may not realize it now, but by the end of this course you should have more comedy topics and bulk comedy material than you could ever get stage time to perform in the beginning of your stand-up comedy adventures.

Bulk comedy material: Comedy material that is more than a line or two (ie: stories about experiences, observations, opinions, etc.) that have not yet been structured, edited, tightened or otherwise prepared for delivery to an audience.

If you are a naturally funny person in everyday life, you should not have to worry about what to talk about on stage.

It’s really all about having access to the right information, knowing how your comedy talent works and how to use it to pinpoint your best stand-up topics.

With that said, let’s get started.

What You Need To Know First

What is it that draws people to want to take a shot at becoming a comedian?

For most people, it is the recognition that they seem to have a way of making others laugh when they are engaged in casual conversations with people that they know or meet.

They seem to be able to use this skill without much effort or forethought at all – it just happens naturally in a most spontaneous way.

And it absolutely does not matter if someone has been labeled a “class clown” or they are just a person who uses their sense of humor sparingly.

The common denominator that all funny people have is that when they do use their sense of humor around the people they know and the people they meet, it generates genuine laughter — noteworthy laughs that can lead to the next thing which is…

They start thinking about taking this ability to easily make others laugh to a more professional level as a comedian or speaking professional.

This situation tends not to improve when they finally hit the stage. They lack confidence in the comedy material that they have worked on. This lack of confidence is reinforced when their stand-up act doesn’t generate the laughs they want.

While the situation that I have just described applies to most new comedians (check out any comedy open mic night to witness this for yourself), it DOES NOT have to be that way for you.

One of the keys to having more solid, tailor made, fits-you-like-a glove-comedy material is to start out with the right comedy topics, ideas and bulk comedy material – before you start creating/developing comedy material for a stand-up act.

And the way that you do that is by understanding, using and applying the already developed natural comedy talent that you have right now to identify the best comedy topics for a stand-up routine.

Important: Your success as a comedian is directly related to your ability to harness your natural comedy talent at every stage of the process — from selecting comedy topics and ideas to start with to delivering tightly structured, funny stand-up material to audiences.

So let’s talk a bit about your comedy talent and how it works.

There is an old saying that goes like this:

“The last thing a fish notices is the water in which it is swimming in.”

The same sort of thing could be said about an individual’s comedy talent. I say that because of the organic and natural way it is developed over many years.

In other words, the last thing a person would notice or pay much attention to is the comedy talent they use automatically and with little forethought – unless they actually knew what to look for, why it matters and how to use it to their advantage.

So understanding what your comedy talent is one of the important keys to having a process to quickly identify comedy topics/material that will cause audiences to laugh.

So now let me define comedy talent completely so that we are both on the same page as I progress in this course:

Comedy talent: The ability to make others laugh as a result of the combination of both aspects of an individual’s sense of humor – the mental aspect and the physically expressive aspect.

Let me break down this definition even further as it is the key to unlocking the already developed comedy talent that you have right now to entertain audiences at a high level:

Sense of Humor Aspect #1 (The Mental Aspect): This is the “lens” through which you see the world around you. It is comprised of your perspectives and points of view on anything based on what you have experienced, know, thought about, etc. It’s how you “connect the dots” in your mind using information that you gather to generate laughs when you are talking with other people.

Sense of Humor Aspect #2 (The Expressive Aspect): This is the natural way by which you actually physically communicate the mental aspects of your sense of humor. This is a combination of the words you instinctively use, how you combine the words you choose to use along with the facial expressions, body language, voice inflection and tone variations that you use when you talk.

It is BOTH of these sense of humor aspects that make up your comedy talent — the exact same comedy talent that you use offstage – that you will want to use when identifying the best comedy topics for your stand-up act.

More About Your Comedy Talent

Your comedy talent is representative of a highly personalized skill set that you have developed over years as a result of countless in-person experiences that you have had with literally thousands of people over the course of your life.

This is important to recognize because it provides the foundation for understanding exactly why someone can’t “learn” to have a better or a “funnier” sense of humor than they already have.

To put this into perspective…

It has literally taken your entire lifetime to not only develop the unique sense of humor mental aspects that you have, but to also develop the physically expressive aspects of your sense humor that you use naturally in order to be able to generate the laughs that you get when you are talking with others.

Again, this applies equally to those who fall into the category of “class clown” or the person who uses their comedy talent sparingly.

The comedy talent that ANY individual has right now is the result of countless live and in-person verbal exchanges that have taken place — starting from when they began talking as a very young child.

So the idea that someone can somehow develop a “new” or “better” sense of humor/comedy talent to get the needed laughs as a comedian on stage — particularly in a short period of time — is beyond ludicrous, at least until partial brain transplant surgery or a new sense of humor type of brain download becomes available.

But you would be amazed at the number of people who actually believe that learning or somehow developing some sort of “better” or “different” sense of humor and comedy talent is a requirement or necessity in order to get the audience laughs that are needed to progress as a comedian.

The important point that I want to make at this juncture is this:

The sense of humor/comedy talent that you have right now is what you will need to use to quickly identify your best comedy topics for a stand-up comedy act once you are armed with the information to do that.

The most important thing that I could possibly tell you at this point is this:

When it comes to anything involving the development and delivering a stand-up comedy routine, you will always be best served avoiding any process that doesn’t not fully incorporate ALL of your natural comedy talent.

Otherwise, you will end up in the same sinking boat most new comedians find themselves in.

Here’s a perspective that I want to share with you:

I don’t believe that trying to guess what may be funny to an audience is a prudent approach to developing stand-up comedy material that will generate noteworthy laughs when delivered.

I firmly believe that most people have all the comedy talent that they need to do well as a comedian.

Something to contemplate – you don’t “guess” when you use and express your sense of humor in everyday conversations and people laugh as a result.

So why should you have to do that when it comes to developing and delivering a stand-up comedy routine?

From my perspective, you shouldn’t have to do that at all.

In the next lesson I am going to cover the biggest mistake that most new comedians make which is how they end up abandoning their comedy talent in the process of creating and developing a stand-up comedy routine.